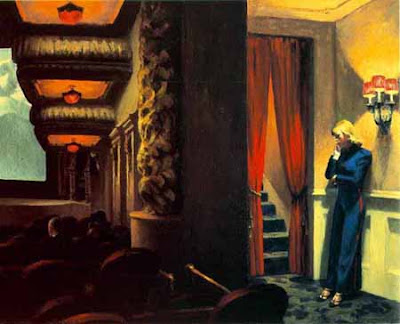 Edward Hopper, born in Nyack, New York (1882). By the time he was 12, he was already six feet tall. He was skinny, gangly, made fun of by his classmates, painfully shy, and spent much of his time alone drawing.

After he finished art school, he took a trip to Paris and spent almost all of his time there alone, reading or painting. In Paris, he realized that he had fallen in love with light. He said the light in Paris was unlike anything he’d ever seen before. He tried to recreate it in his paintings.

He came back to New York and got a job as an illustrator at an ad agency. He hated the job. In his spare time, he drove around and painted train stations and gas stations and corner saloons. He’d sold only one painting by the time he was 40, but his first major exhibit at the Museum of Modern Art in 1933 made him famous—paintings with titles such as “Houses by the Railroad,” “Room in Brooklyn,” “Roofs of Washington Square,” “Cold Storage Plant,” “Lonely House,” and “Girl on Bridge.”

He’d also been an illustrator for business magazines, and he became one of the first American painters to paint office scenes. Several of his paintings show office managers surrounded by gorgeous, buxom secretaries, or people working late at the office, sitting at desks high above the city.

He lived and worked in the same walkup apartment in Washington Square from 1913 until 1967. He ate almost every meal of his adult life in a diner. He never rode in a taxi. He loved the theater, but he always sat in the cheap seats. He never had any children with his wife, and he never included a single child in any of his paintings. The closest he came was a painting called “New York Pavements,” showing a nun pushing a baby carriage. His painting “Four Lane Road” is his only painting that shows people actually communicating: a woman is yelling at a man.

Edward Hopper said, “Maybe I am slightly inhuman … All I ever wanted to do was to paint sunlight on the side of a house.”